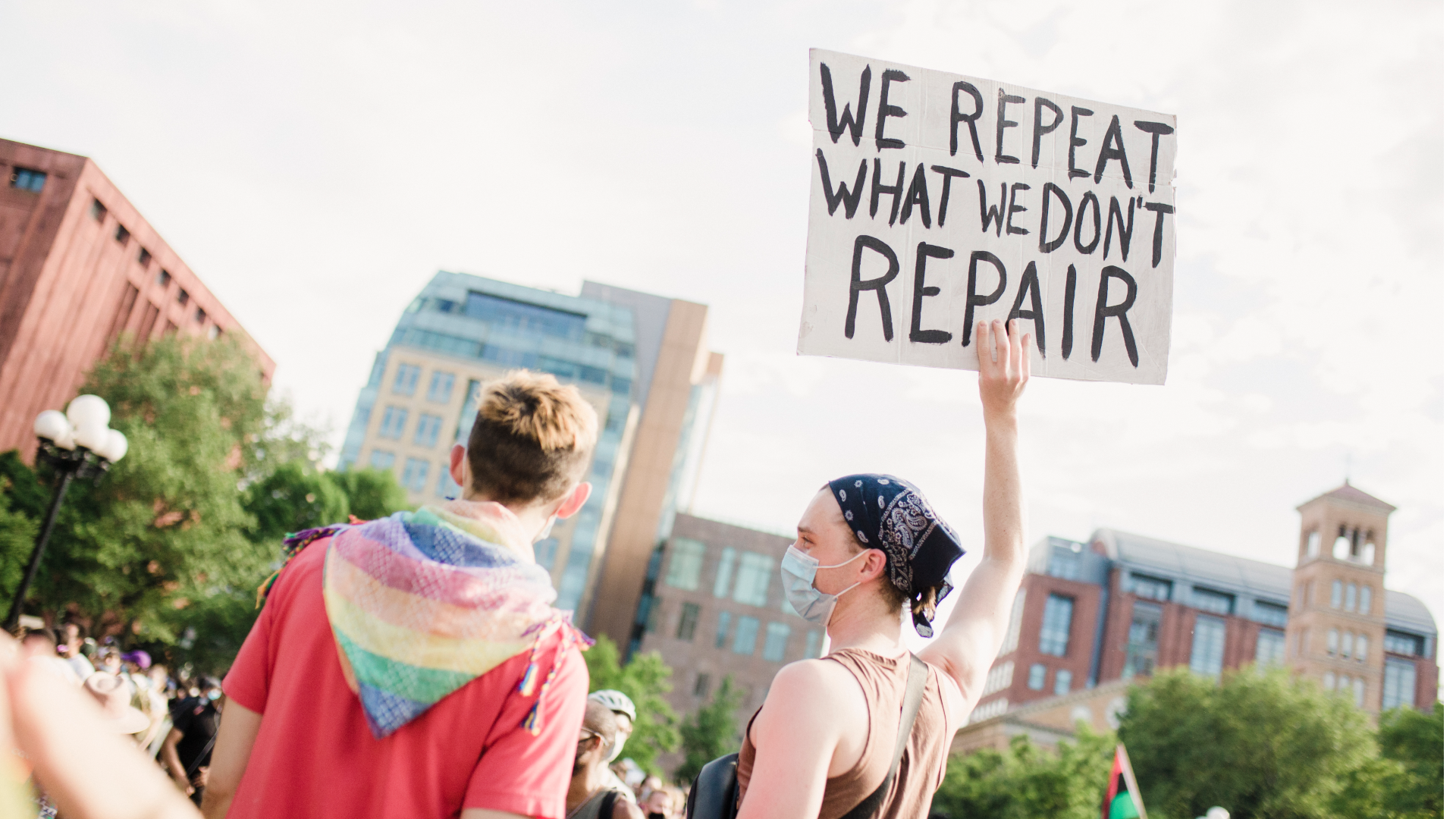 The Terrible Destiny Line of Racism in the U.S.

I am a White woman who has been an anti-racism educator for 30 years.  I consider it an act of sacred activism to educate my fellow White Americans about this terrible stain in the U.S.  I think this destiny was in my blood and bones. Certainly, it was a family passion that was passed on to me. Here is my story and how it shaped my view and my work.

I was born in 1961, at the very tail end of the Boomer generation.  I am the same age as singer-songwriter, Jennifer Berezan who sings:

“I was born in ’61.  Seeing the world had just begin. There were a million things you could put your faith in.  I was raised on Herman Hesse, women’s rights, left politics, and Bob Dylan before he got religion. We knew that  we could make it right and change this world overnight. We sang and marched and we believed.   We knew we could make it right that we could change things overnight.”

I felt all this at a soul level, even though I was too young to participate in the countercultural and anti-war movements.

My parents were liberal and supporters of the Civil Rights Movement.  My father was traveling on business in Nashville during the lunch counter sit-ins.  He wrote in a letter to my mother, “I admire the folks who are doing sit-ins at the lunch counters.  Segregation is a travesty.” Decades later, he was the Equal Opportunity/Employment representative for Campbell Soup Company. My father set the template within me for activism anchored in caring for all people and standing up for the underdog. I consider these to be spiritual values.

For the first 13 years of my life, my family lived in the white suburbs of New England outside of New York City and later, Boston.  It was a privileged upbringing in places where there were no dark-skinned faces that I remember. Despite other ways I have been disadvantaged, such as being a woman, I have had many benefits that African Americans do not.

When I was around 6 or 7 years old, my parents sat me down and said that we were going to have a very special houseguest that night. They explained that his skin was black and that I was to remember that everyone, no matter their race, is a human being and is just like me.  It is sad they even had to do this given the segregated nature of our community. I still have a strong memory of this warm, intelligent, caring, and kind man with deep blue-black skin and sparkling eyes.

At the age of 13, my family moved west to Evanston, Illinois, just north of Chicago, where, for the first time, I attended fully integrated middle and high schools.  There I experienced throughout my teen years the heightened tensions between Whites and Blacks in the 70s.  No matter that it was in the North, the bloody stream of racism was alive and well there, as it was (and still is) in the soul and psyche of America.

At the middle school I attended, as the students were herded back inside after recess, a group of Black girls had discovered some bushes with long thorns. They were randomly jabbing them into the butts of the White students in the crowd. Later, in high school, unlike most of my peers, I was willing to reach across the color line.  I became friends with two Black boys who studied theater with me.  A gang of Black girls who didn’t like it stopped me one day on the way home and threatened me with violence. I was also sexually harassed by Black boys in an empty school stairway.

In all these cases, I was not mentally or physically harmed. I kept my head screwed on and managed to walk away unscathed. The duress of discrimination bubbled up in few people and I was momentarily in its path.

You might think that these incidents could have turned me into a person who rails against “Black racism” and says that Black men are all predators.  This is not in my nature or worldview. Not only have I had many positive experiences with African Americans, but to be frank, I have also had many more negative experiences with Whites, including sexual harassment.

Do I then characterize all Whites as violent and untrustworthy? Do you?

I am not one to lean into stereotypes or to characterize whole groups as this or that no matter what my experiences.  White people have the luxury of not having to think of themselves or be thought of as a group or as “representing” their race.  Since slavery, we have had the upper hand and continue to, despite the ways some things have changed since the Civil Rights Movement.

I know that human beings under duress will act in ways that are confused and harmful to themselves and others.  I have also heard White people make uninformed, ignorant, and often overtly racist statements, as well as revealing in their actions, racist attitudes about Blacks, some consciously and some unconsciously. I myself have done so. I have had to learn.

This does not excuse anyone’s bad behavior, but when it does happen, we are called to look more deeply rather than to move into blame and fear.

Among Whites, a fear for survival—pointing, as well, to deep wounds from violence—morphed into old, unchecked beliefs in superiority and inferiority arising out of Mind of Domination.  It is not that Whites were the sole creators of this lower spectrum of consciousness, yet, for hundreds of years, we have been its main purveyors on many continents.  This puts us in the hot seat to address its causes and conditions within and around it.

Historically, when a destiny line of intercultural, interracial violence is activated and left unchecked, the frustration, anger, fear, and unhealed wounds of the victims and the thought forms of separation and segregation in the perpetrators—also seeded by the same energies—are propelled forward with increasing momentum. It takes on a life of its own.  Violence and oppression plant an energetic vibration in the bodies of both perpetrators and victims and, unless transmuted, becomes a collective sickness from which we all suffer for generations upon generations.

This is how a destiny line of racism has continued in the U.S.  The true history of slavery, the Civil War, Reconstruction, Jim Crow, and onward—if you are willing to confront it—shows the map very clearly.  Oppression creates unique challenges not experienced by those who have the benefit of being free of it.  With that freedom comes responsibility.

A destiny line doesn’t necessarily shift overnight or quickly. It may take years—even decades—even hundreds of years. Because in divine timing, linear time as we experience it, is really only a flash in the pan.  But, to harness our highest destiny lines free from racism, we must be proactive.

How do you step up into sacred activism if you are White?  Because, as I have indicated, I see my mission as motivating you.  Inner work and self-confrontation are a powerful dimension of this work.  We must heal the ancestral stain of all legacies of oppression, war, slavery, racism, sexism, homophobia, domestic abuse, and other dimensions of the lower destiny lines arising out of Mind of Domination that lurk within us.

While doing this is something everyone on this planet needs to do to end violence in all its guises (we are all the walking wounded), doing it now as a White person in the U.S. is particularly important so we can partner with and support the energy of the Black Lives Matter movement. Thus, together, we collaborate in continuing the momentum of the new destiny line that was started by Martin Luther King, Jr. and the Civil Rights Movement. So, even while there is ongoing resistance and denial from many quarters of the grim reality of police brutality and systemic racism towards African Americans (and other people of color) in this country, the vibrational frequency of a shift to true equality continues to evolve until its promise becomes anchored reality.

Heed the call.  Become aware of the legacies of racism within you, no matter how subtle.  The time is now to shift the trajectory of the destiny lines of group-based hatred and violence into a world of compassion, peace, and collaboration.

Rachel Mann is a sacred activist for ending violence, shamanic healer, social scientist, and holistic psychotherapist. She mentors women and men who wish to integrate their spirituality into their service to others. Find out more at rachelmannphd.com.

Not the Cause or the Cure, Simply Compassionate Contribution